You would think that playing Don’t Starve with friends would make things easier, wouldn’t you? NOPE. With Don’t Starve Together (DST), what used to be a knife-edge survival game where every second counts quickly becomes a knife-edge baby-sitting survival game where every second counts but you’re also stopping every three minutes to explain to someone why they should please stop eating all the monster jerky.

Monster jerky makes you insane and then you hallucinate monsters and then you die and I have yet another of your corpses lying in the middle of the camp.

It’s not the newbie’s fault, obviously. The release of DST has drawn a whole new audience; sociable people who enjoy playing games together with friends. Sociable people. And unfortunately, there’s no tutorial and no way to leave permanent messages in the world, making it very difficult for new people to learn without active support.

So, if you’re one of those people who is a complete beginner with Don’t Starve Together, here are a few tips for you. I’m assuming that at least one person on the server has some idea of what they’re doing and has created the basics.

View at full size for a quick primer on basic camp objects. 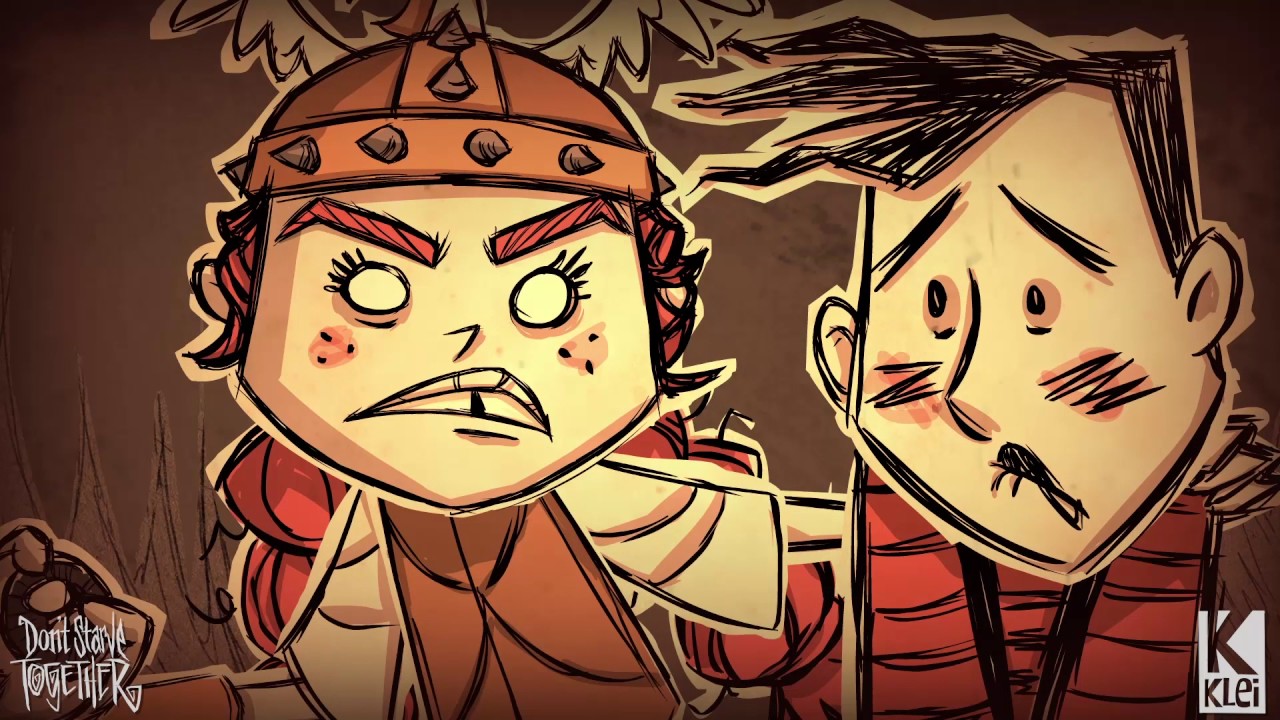 Get basic survival gear. You’ll need twigs from saplings and flint, which is often lying on the ground. If you can’t see any nearby, press Y for the world chat and ask, as the area around the portal may have been completely scavenged.

Make an axe. Make a torch. Cut down trees for logs, grab some grass and always carry around enough to make a fire. Next, you’ll want a spear for basic defense and a straw or log suit for armour.

Gather and collect. No matter how inexperienced you are, there is always something useful you can do near the camp. Cut down large trees. Plant pine cones to make more trees. Get manure from the beefalo and bring it to camp. Refine some (but not all) logs into boards because they burn longer and brighter on the campfire. Refine some (but not all) grass into rope. Build traps out of twigs and grass to catch spiders or rabbits. Harvest rabbits and spiders from traps and hang their meat on the drying racks or put them in the fridge. Grill monster meat over the fire and feed it to a bird for eggs. It takes a lot of work to feed a camp.

Don’t eat simple food. I mean, sure, cook a carrot over the fire and shove it in your face if you’re one the verge of starving. But if you want to fill your hunger meter, cook food in the Crock Pot as you get a much better stats boost from it. There should be one near the campfire. Two of the best simple recipes are Meatballs (one large meat and three veg or three morsels and a veg) and Bacon and Eggs (one large meat, one small meat, two eggs). 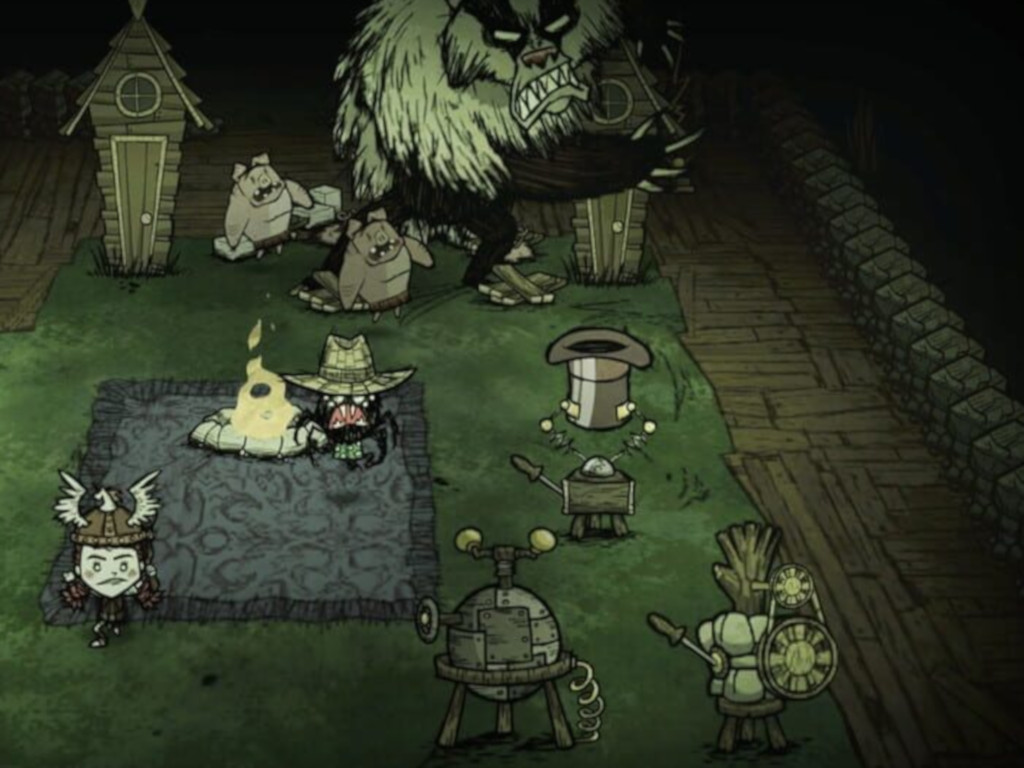 Don’t eat Monster Meat. Seriously, that stuff is bad. You can use it as a single large meat in the crock pot but never use more than one or you have a 50% chance of creating Monster Lasagna which is also nasty and a waste of good ingredients.

New build recipes come from machines. You might see a science machine and an alchemy engine in the camp. Stand near them and your menu on the left will show new objects that you can create. You’ll need to be near the machine to prototype the first, but then you can make them from anywhere in the world.

Build/plant near the lightning rod: Every camp needs one or you run the risk of something crucial being struck by lightning and burned to the ground. Build within about 2 screen-widths of the rod.

Chests are probably shared. There’s no way to mark property. Ask first, but it’s more than likely that the chests contain stuff for everyone to use. You have lots of inventory slots to keep important stuff on your character. I usually put food near the crock pots, manure and seeds near the farm, and try to stack other stuff as much as possible. Have a look around and try to keep things in order. 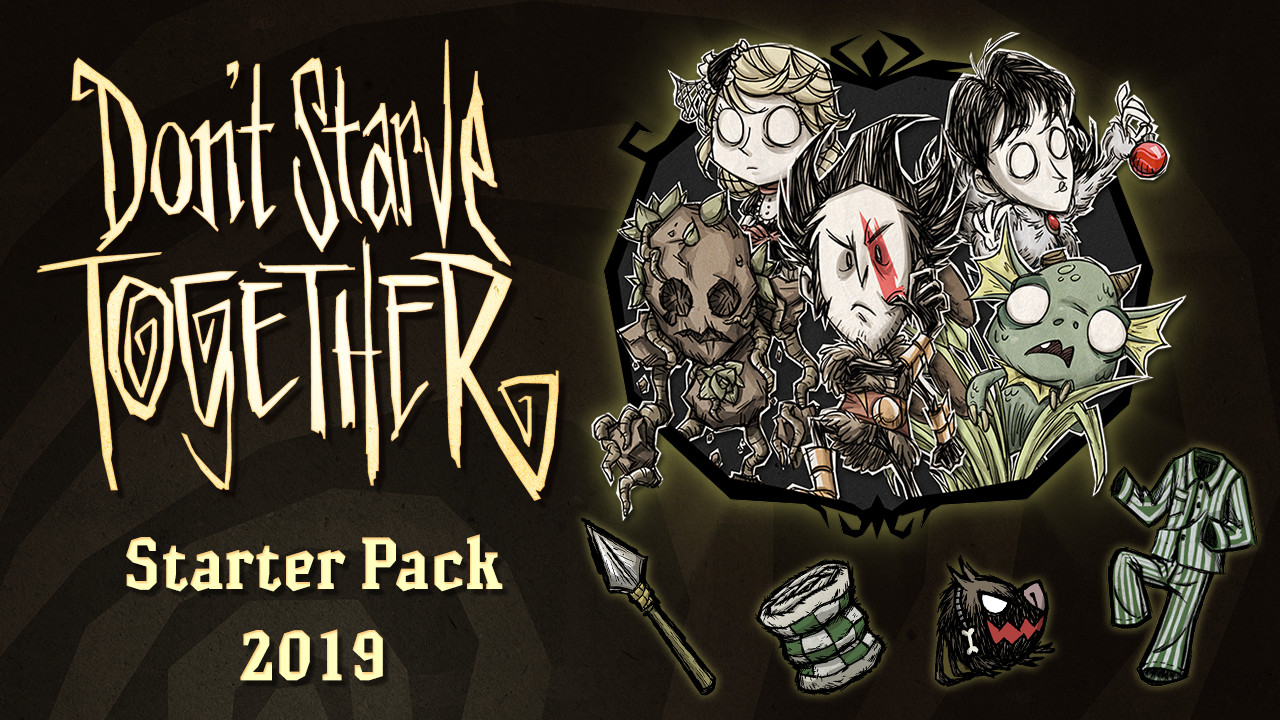 Maps are not shared. I find this quite awkward and do wish there was some item players could use to combine map knowledge. There doesn’t seem to be.

Watch yourself. Constantly. In the top right corner are your hunger, health and sanity meters, which will deplete according to dozens of conditions. Any of those can kill you. Crock pot food fills all three (health slowly). Combine spider glands, rocks and ash for a healing salve to boost your health. Picking flowers regains sanity. Wearing hats slows down sanity loss. Making a bedroll or sleeping in a tent trades hunger for sanity, so cook some food before doing this.

If you’re playing Willow, remember that she burns stuff when she gets unhappy so STAY THE FUCK OUT OF CAMP IF YOU HAVE SANITY ISSUES.

Willow can raise her sanity by standing near fire, so maybe build yourself a little sanity campfire nearby for everyone’s safety.

Now, I realise that this is a lot of information to take in. As long as you remember the first three, you should get along fine with most Don’t Starve survivalists. You may even survive a whole week without getting yourself killed.

Don’t Starve Together is currently available on Steam through paid beta access and will be made free to all Don’t Starve owners upon full release through Steam. There is no full release date as yet, nor confirmation on a PS4 version.