Atlantic humpback dolphins are only found in the nearshore waters of the tropical and subtropical Atlantic coast of Africa. Sightings, strandings and bycatch records confirm the species’ current or recent presence in 13 countries between Western Sahara in the north and Angola in the south.

The Atlantic humpback dolphin (Sousa teuszii) is endemic to (sub)tropical waters along the west coast of Africa in the eastern Atlantic Ocean. The species is characterised by a robust body, a long and slender beak, and a diagnostic long, thick hump on the dorsal surface on which the small dorsal fin is situated.

The distribution and status of the Atlantic humpback dolphin is very poorly known, and in recent years its conservation status has been of considerable concern. While it ranges from Western Sahara to Angola, its occurrence within this range appears to be discontinuous and there are no data available regarding total population size in any of the confirmed range states. Moreover, the species occurs only in very nearshore waters (often <1 km from the coast), and consequently experiences high exposure to anthropogenic pressures including fishing, habitat degradation and loss, and hunting. The limited available data suggest that by-catch in fishing gear and deliberate hunting may be significant causes of mortality. In recent years these concerns have resulted in the Atlantic humpback dolphin being upgraded to the Convention on Migratory Species (CMS) Appendix I and assigned Critically Endangered status on the IUCN Red List.

Given the lack of previous systematic information on the ecology of the species, Caroline Weir’s PhD research included focus on the Atlantic humpback dolphin in Namibe Province in southern Angola (Weir, 2009, 2011). The work comprised boat and shore-based surveys aimed at assessing the distribution, population size, habitat preferences, behaviour and ecology of the species at two different times of year (January and June/July 2008). Atlantic humpback dolphins occupied the study area in both seasons, but the number of animals using the area was very small. Only 10 individuals were identified, most being photographed repeatedly in both seasons and including one calf born to a marked individual between the two study seasons. Photo-identification work was successfully carried out from both boat and shore, and the first acoustic data were recorded for this species anywhere in its range. Additionally the first dedicated focal-follow behavioural data were collected on the species, providing important information on habitat use.

Similar provisional assessment field surveys have since been carried out in two additional countries within the core range of the species:

Both involved the collection of information on the distribution, movements and abundance of dolphins using photo-identification methods, producing systematic scientific data that are needed for developing future management and conservation measures.

The status of Atlantic humpback dolphins continues to be of concern, and attempts to reinvigorate efforts to conserve the species have recently commenced (Weir et al., 2020). This has included the formation of a new collaborative initiative in 2020: The Consortium for the Conservation of the Atlantic Humpback Dolphin (CCAHD), which aims to: work towards the long-term sustainability of Atlantic humpback dolphin populations and their habitats through research, awareness, capacity-building and action. The CCAHD comprises a network of locally-based scientists and educators within the Atlantic humpback confirmed and potential range states, along with international experts who will provide guidance and support, with the overall goal of improving the status of dolphin populations.

Atlantic humpback dolphins travelling along the coast of Angola.

A group of Atlantic humpback dolphins off southern Angola.

Weir, C.R. and Collins, T. (2015). A review of the geographical distribution and habitat of the Atlantic humpback dolphin (Sousa teuszii). Advances in Marine Biology, 72: 79–117.

Weir, C.R. (2011). Ecology and conservation of cetaceans in the waters between Angola and the Gulf of Guinea, with focus on the Atlantic humpback dolphin (Sousa teuszii). PhD Thesis, University of Aberdeen, UK. 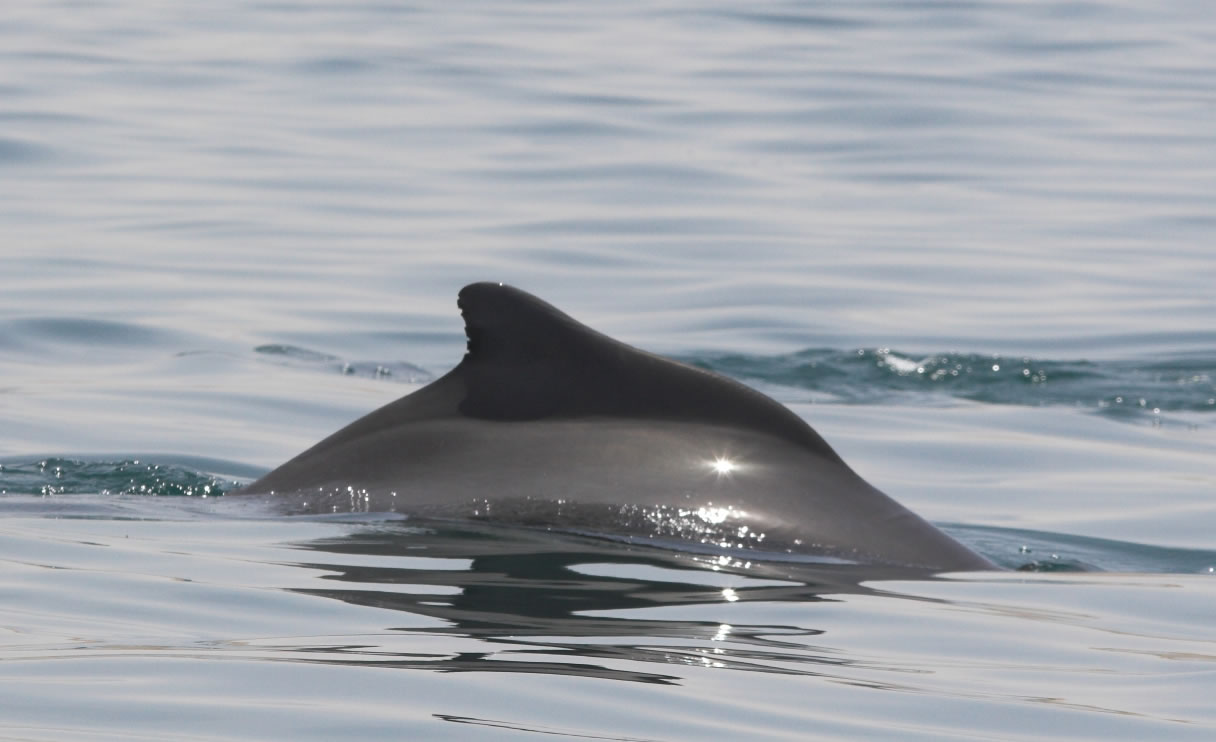 The list of endangered animals in Africa now has a new addition: the rare Atlantic humpback dolphin.

The declining known populations of the rare dolphins which are named after the characteristic hump just below their dorsal fins has seen its status listed as “critically endangered” on the International Union for Conservation of Nature’s (IUCN) list of threatened species. The list already includes more known animals such as gorillas and black rhinos. The Atlantic humpback dolphin had been previously designated as “vulnerable.”

The dolphins are usually seen along a 7,000-kilometer range along the coast of Western Sahara to Angola.

The most recent assessment of the Atlantic humpback dolphin estimates that there are fewer than 1,500 breeding adults with data suggesting that the dolphins occur in “very low and apparently declining numbers” across the range with most population groups found appearing to be “extremely small” and “isolated.”

There is a silver lining for the rare dolphins though as researchers say marine protected areas such as Gabon’s—a 20,500 mile area which protects 26% of the country’s territorial seas—could serve as a safe haven until conservation efforts are hopefully stepped across the range in response to the more new endangered status of the dolphins.